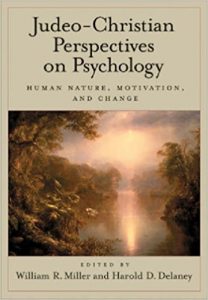 The USA publisher’s/editors’ ‘blurb’ for this new book by Miller and Delaney is reproduced below in order to provide a general perspective on relationships between basic and applied psychological science and Christianity (at least in North America), independently of any evaluation of the contents of the book.

(Miller has been a leader of the “motivational counseling” approach to drug problems and other therapy, closely related to the theory of stages in a person’s changes of behaviour. He is keynote speaker at the UK NeCiP Conference in 2005.)

Description of Miller/Delaney 2004 by the Publisher:

Judeo-Christian Perspectives on Psychology represents a dialogue that is likely to be fruitful in several ways.

First, a majority of the U.S. clients that most psychologists serve are religious (primarily Judeo-Christian) in some sense, whereas psychologists tend to be among the least religious of any professional of scientific group [in the U.S.].

Second, this book will enhance cooperation and collaboration between psychologists and faith-based individuals and groups.

Third, it is astounding that the spiritual-religious side of human nature has been almost totally ignored within mainstream personality theory and assessment.  This volume will encourage consideration of the spiritual as another dimension in need of study, understanding and evaluation.

Fourth, the perspective of three millennia of Judeo-Christian thought might more generally enrich the discipline of psychology, and cultivate some new areas of dialogue and study that were largely shunned by our discipline during the 20th century.